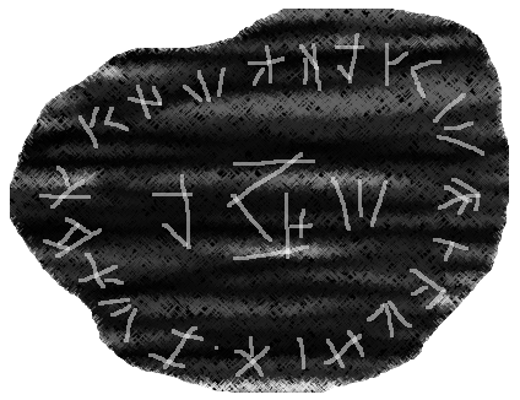 The Rook of Singing Water

Having chosen to climb the escarpment and travel along the crest to avoid the marshy ground at it’s base I found a game trail. Presumably, local wildlife preferred the higher ground as well. The bluff had a back-slope, and a small river ran parallel to my chosen route. As I travelled I could hear some falling water ahead, and was eager to take in the view from above this unseen falls.

The trees cleared and I found what I initially thought was a tribal marker, denoting the bounds of some claimed territory. A forked cedar branch had been propped up by a mound of stones some 3 feet in diameter. Strung from the branch by leather thongs were carved tokens of bone, stone and wood, and a hardened clay disc about the size of my palm, marked with unrecognizable runes. I have included a rubbing I made of this ornament.

I looked about the clearing and saw several more of these markers, arranged seemingly haphazard manner, but all had a similar decorated branch. It wasn’t a tribal border at all, the piled stones were graves. I was already well inside the territory of some unknown peoples, and treading amongst their dead.

I recited a short prayer for the unknown departed and hurried through the clearing, leaving the graves disturbed no further. Upon reaching the far side and the welcoming shade of the trees again, I was stopped by a figure on the trail before me. It stood about a head shorter than myself, was leaner, by half, and carried a stone tipped spear in one of its four hands.

It made a gesture bringing all four hands together at the centre of its chest and then spreading them outward, palms open, except for the hand which held the spear. Not being sure what else I could do, I did my best to mimic the gesture.

It was at this exact moment that the blue twin-crested peeper whom I had befriended a while back, with a sample of my rations and some grubs from a dead log, decided to leave its perch in my pack, and climb atop my head. Seeing this the strange figure gave a whistled-snorting sound, and made a drawing in gesture with one hand. I can only presume it was a laugh, as I must have looked ridiculous in anyone’s eyes with my warbling lizard for a hat.

I was fairly certain its intentions were benign. In my experience, anything wanting to eat a person doesn’t bother to invite them to walk themselves to the larder. So, with a small lizard still adorning my head, I followed. As we walked, two more of these strange beings melted out of the woods and fell in step behind me, the green and brown hues of their scales made for excellent camouflage.

The falls it turns out was formed by several brooks and streams all coming together at a small canyon carved into the bluff over time. The rushing water, and my guide, disappeared over the edge into a narrow cleft in the rocks.

Peering over the edge I saw that a deep grotto had formed, extending well back from opening. Thick vines descended to the surface of a dark pool, and my host was climbing down them with alacrity I could not dream to replicate. I glanced back towards the way I had come from beyond the shoulders of my twin escorts, and began my own descent.

The Rook of Singing Water is a unique colony of Etausi-Mal, whom have established a home in a large grotto fed by several mountain streams which culminate at a large cave opening. Numerous streams of water cascade and drop down through the ceiling into a wide deep pool of clear water. Suspended amongst sturdy vines hanging from the roof of the grotto are the individual dwellings of the Etausi; Giant baskets woven from the still living vines, hang like fruit, each housing a handful of the colony’s population.

Below the large pool of the grotto flows down a wide stair-like formation, in a series of mineral crusted pools. These pools in turn drain into a shallow lake. The lake itself is dotted with the floating island lodges of common lodge lizards.

This small piece of paradise is maintained by the rook, who have taken to domesticating the lodge lizards, as a sustainable food source. They practice agriculture utilizing some of the floating mats as garden plots, adding a layer of rich loamy soil and scattering the seeds of wild cereal crops, melons, squash, and some berry bushes. The domestication of animals and sustainable agriculture is rare amongst the Etausi. Most groups remain exclusively hunter gatherers.

Etausi-Mal, have the same four-armed bipedal body form of other Etausi, with long whip-like tails, stand on average about 1.5 (5′) tall, weighing approximately 60kg (130 lbs), their scales tend to greenish hues, some shift through the seasons to yellow, orange or red in step with local foliage.

They wear little clothing beyond simple harnesses for carrying tools, and pouches of supplies. Their tools are generally manufactured from wood, antler, bone, and stone.